Kerry takes the crown at the 2019 Premier

The wet weekend far from damped the trade at the Annual Texel Premier Sale! It was the time to shine for the O Sé brothers from Kerry yet again! This time it was off the field with Fergal O Sé bringing out 3 ET brothers, all sired by Garngour Alabama and out of a Tullagh Saracen ewe that caught and held the eye of Mr.Alan Blackwood. The first brother stepped out in the Open class taking first with the next brother claiming 2nd in the Lamb Plus class, it was their collective time to shine as a group with the 3 full brothers taking first placing. This was only the start for Fergal with the winner of the Open Ram Lamb going on to claim the Male Champion and then later the overall champion of the show. He went on to sell on the Saturday for €2,600 to Mc Hugh flocks.

The Reserve Male champion followed in the footsteps of his father Donnelly Alonso, who won the same title in 2017, he was brought out by the brotherly duo John and Colm McHugh who later sold for €2,400 to the Clougher flock.

The females did not disappoint with the Champion hailing from the South West Region also. The Champion who was the winner of the Shearling ewe class was a Claybury Warrior daughter. She later also claimed the Reserve supreme title and was  brought out by father and son team Arthur and Patrick O’Keeeffe. Later she sold to new breeders Francis Divilly from Co. Galway.

The reserve female came from the Larahirl flock of John Green from Co. Donegal  with a shearling ewe sired by Strathbogie Yabba Dabba Doo. This one later sold for €2,100 to Patricia McCormack from Co. Roscommon.

It was clear to see that farmers were present in numbers to purchase some of the length and superior quality bodied Texels presented. Many were buying rams in the region of €450 to €950, with the farmers travelling from all over the country due to the exceptional choice that was on offer.

It was clear that pedigree buyers were also willing to invest in good sheep with the top price of the day going to 1st Prize Novice Ram Lamb from Roger  Doherty Co. Donegal, after brisk bidding the Strathbogie Yes Sir son sold for €12,000, he heads back to Donegal with John Mcloone.

The next highest male came from John and Colm McHugh’s double five star Donnelly Alonso son, he was sold to Wexford Breeder Liam Dillon for €3,000.

The brother also claimed the next highest price with a Kilclammon Brody Son who was knocked down to Pat Lyons for €2,700.

The next highest price was for the 2nd prize LambPlus lamb from the pen of Fergal O’Se selling to Aidan Deegan Tipperary.

Coming in close behind for the next highest was James Dunne with his Strathbogie Boss son selling for €2,500 to PJ Kenny Longford.

The next highest price went to new breeder TJ Duffy with a Strathbogie Yes Sir son who sold to Allysha Moore for €2,400.

The next top female went to Liam Dillon with his 5th Prize shearling ewe sired by Arkle A One. This one was the pick of Ron Darlington.

Following close behind was the 4th prize shearling ewe from the Corryhill flock sold for 2,300gns to John and Cayla Wehrly. This one was sired by Knap Aligator.

The final one to hit over the 2k mark was the 6th Prize shearling ewe from John and Colm McHugh with their Thornville Alberto gimmer selling for €2,100 to Daniel Murphy Co Monaghan. 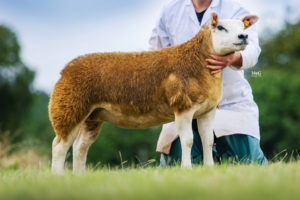 The averages will speak for how demand was consistent throughout the sale for quality lots.