Greenstar Flock produces a Star with their first lamb at Blessington Premier.

John Greene also sold a full brother of the Champion for 5700 to Rodney McLaughlin, Clara Texels

The Reserve Male Champion exhibited by Anthony Donnelly Lot 212 DII1701298 also a grandson of Wallstreet by Knock Yazoo was purchased by McHugh Bros from Donegal for €4800. 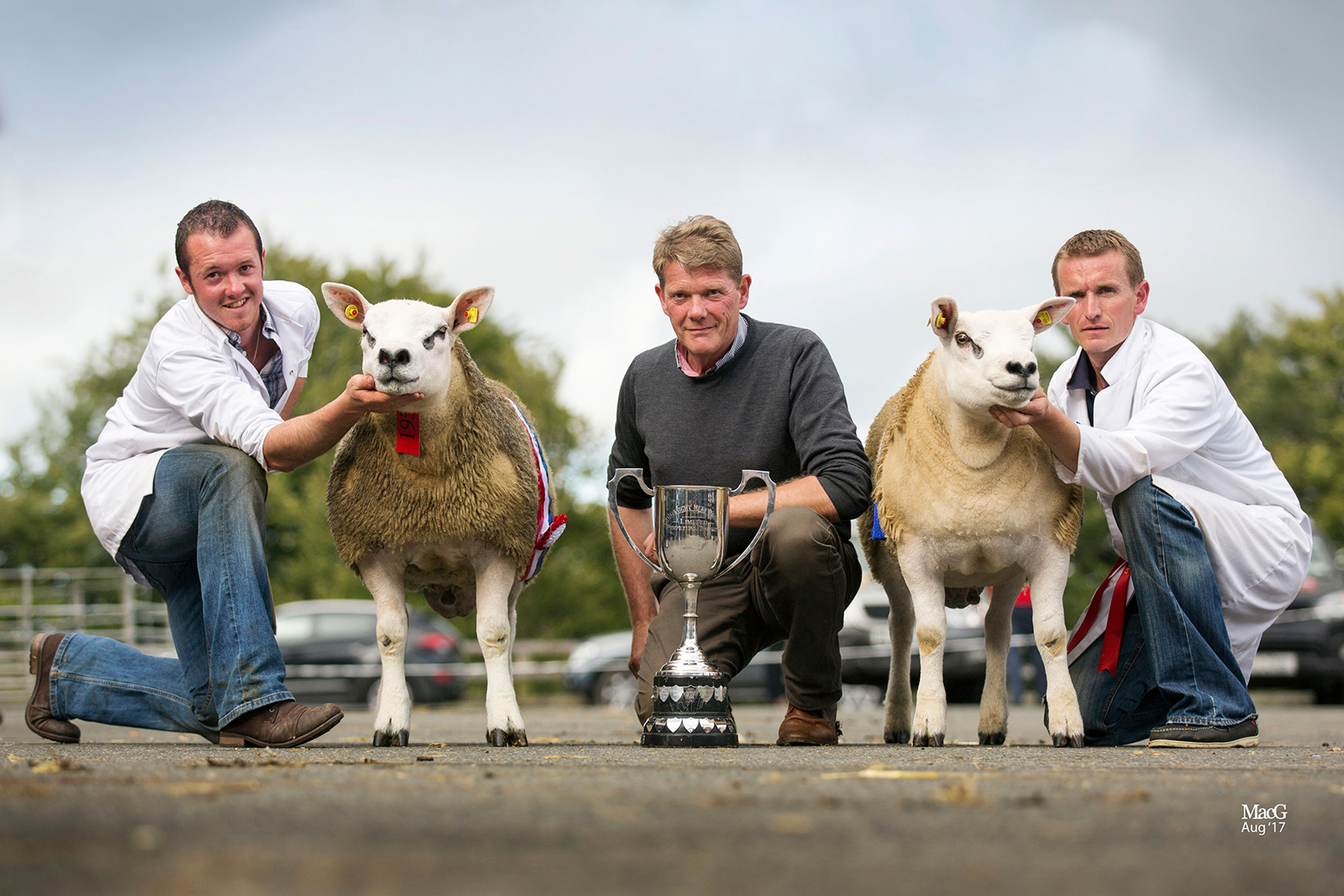 In the female classes Mr. Mellin found his Champion in a hoggett ewe sired by Claybury Warrior exhibited by A&P O’Keeffe OKI16029, she sold for 1450 to Ben Kelly. Reserve Female Champion was awarded to D&E McManamon with a daughter of Forkins Will-I-Am and a Strathbogie Stiffler ewe she was purchased by Donegal breeder James McGrath for €2300. The highest priced female was Lot 15 exhibited by Flor Ryan, Ryan Texels. This flashy daughter of Duncryne Uber Cool was snapped up by Hexel Texels for €4300.

Flor Ryan and John Donohoe then went on to purchase a son of Cressage Yankee bred by McHugh Bros Donegal for €3000. John Greene then presented Lot 305 a full brother to Greenstar Alfie into the ring. He was purchased for €2600 by Noel Gallagher Agricare Texels Co. Donegal. Ronan Gallagher then hit €2600 with a son of Tophill Union Jack selling to Michael Sinnott Co.Wexford. Co. Cork breeders Eddie & Sheena McCarthy snapped up another very catchy son of Tophill Will Street for €2400, bred by Willie Doherty’s Hillcrest flock from Co. Donegal. John Greene then continued his winning ways by selling a Strathbogie Yabba Dabba Do son for 2200 to Co. Meath Texel breeder Pascal Keogh. A son of Knap Your the Man from Thornville Texels was purchased by J, C & M McHugh for €2100. They then recovered their outlay by selling a Maineview Will-I-Am son at the same money to Edward Buckley Kilbarry Texels Co. Cork

P&B Farrell sold Oberstown Ysagyum sired by Procters Ventura to Michael Murphy’s Co. Galway Texel flock for €1900. Also at €1900 a lamb sired by Mac’s Wannabes bred by Shane McHugh found his new home in the Hillswood Flock of Tom Kenny Co. Roscommon. A commercial buyer got value in Lot 253 by Foundry Texels when he purchased a powerful ram sired by Greenhill Yemen Boy for €1800.

Pedigree rams cleared at varying prices ranging between €350 to the top price of the day for the Champion at €17000. Overall there was an 82% clearance rate across the sale. Female clearance at 69%, with prices from €420 to €4200 for the highest.