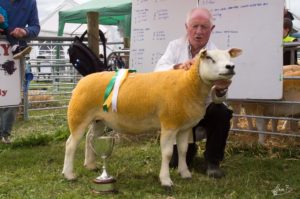 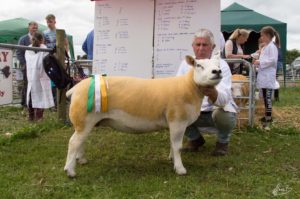 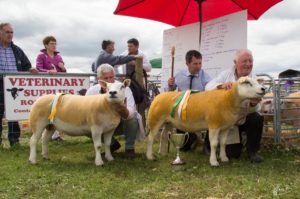 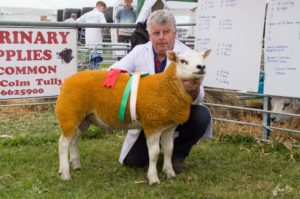 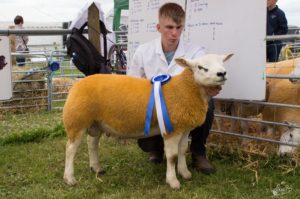 After a last minute change of date and venue due to the cancellation of Galway County Show, the West Region Championships for 2017 were held at Athlone Agri-Show on Sunday 25th June.

On a beautiful warm sunny day which was a welcome change from the torrential rain which was a feature of the 2016 Championships, over 120 Texels were put before our Judge, John Foster of Springhill Texels from Castlederg, Co. Tyrone

We started with the Senior Ram Class. Niland’s White Knight exhibited by Gerard Niland took the red rosette. He was sired by Knock Ursus, his dam was Chessy PNI 10103 by Ettrick Oki Doki.

We had a fine display of Senior Ewes with Tom Kenny’s ewe Hillswood KTE14029 by Annakisha Uproar and a Chessy ewe by Ettrick Oki Doki taking 1st place. Alma & Lorraine Brennan, Brendan & Patrick Hanley, PJ Kenny, Tom Kenny and David Gibbons were the other prizewinners, in that order

PJ Kenny’s Shearling Ram Shannagh YoYo was the winner in the next class. He is by Knock Trident and a Shannagh ewe by Mossknowe Pudsey. Brendan & Patrick Hanley were 2nd & 4th in this class, with Cyril Keane 3rd, and John Brooks and John Higgins 5th & 6th respectively

Padraig Treacy’s Gailey A One, a half-brother to last year’s 8,000gns lamb in Blessington took 1st place in the Senior Ram Lamb class. He is by Baltier Nailer and a Gailey ewe by Duncryne Uber Cool. Tom Kenny swept the boards in this class taking 2nd, 3rd, 5th & 6th places with Darragh Cunniffe in 4th place.

Maree AP McCoy exhibited by Cyril Keane was the winner of the class for Ram Lambs born after 1st March. He is by Tooreen West Yehudi and a Maree ewe by Craighead Masterpiece. Other prizewinners were Gerard Warde, Tom Kenny, Kenneth Bailey, Michael Haverty and John McGloin

In the class for members who joined the Society since 2011, Brian Connelly’s Ram Lamb, Stonepark Ace by Stonepark Yuri and a Miller Ewe by Donnelly Ultan was 1st, with Brian Egan in 2nd place.

In the class for a Group of 3 from the same flock, Tom Kenny was 1st, with Padraic Niland and Brendan & Patrick Hanley, 2nd and 3rd.

Thanks to the Committee of Athlone Agri-Show for accommodating us in holding the Championships at short notice. Thanks also to those members who assisted with setting up beforehand and taking down the penning after the show. To our 3 ring stewards for their work on the day. Congratulations and thanks to the members for the huge show of support in the great number of entries.

A huge vote of Thanks also to our Sponsors: