The Irish Texel Growvite premier sale rises to match the temperatures that hit on the highlight of the Texel year!

We are delighted to have our main sponsor on board for the 2nd year in a row adding to our 25 year partnership with Univet/Growvite. With many of the top prices being turned out on Growvite it’s no wonder farmers believe in the Growvite products.

This was the biggest premier sale in the history of the society and the day was kicked off as per usual with the societies detailed Veterinary inspections. This gave customers both in person and online peace of mind when purchasing.

It was then over to the hands of the Judges of the day. Brotherly duo James and Robbie Walker of the renowned Kilcurley flock, were handed the challenge. This was a switch over this year for them from receiving Overall Champion in the sale last year to handing out top honours this year!

First up on the day was the Shearling Ewe class. Another brotherly duo John and Colm McHugh, came up trumps with a daughter of the renowned Procters Class Act. She later went on to be Reserve Female Champion and sold on Friday evening for €2,500 to fellow Monaghan breeder Damien Kerr . 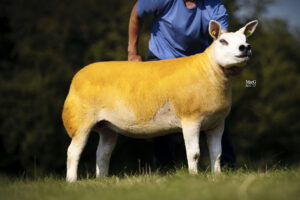 Next up was the hotly contested ewe lamb class. Like in the earlier category another family duo came to the fore. This time it was the father and son duo of Pat and Barry Farrell got the nod for their Garngour Craftsman ewe lamb. She later went on to claim female champion and reserve overall champion of the show. Later in the evening the hammer fell at €4,000 which topped the ewe lamb trade. She is joining new breeder Fintan Hackett from Co Monaghan. 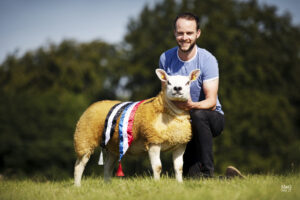 Robbie and James then turned their attention to the ram classes. First up was the shearling ram class and it was John Neville who came out on top with a Glenroe Bacardi son. He sold on Saturday morning to Charlie Clarke Co Monaghan for €3200. 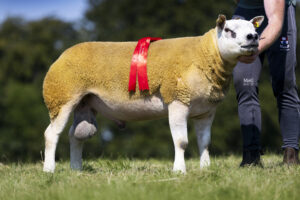 Next up was the open ram lamb class. Taking top spot was Rodney Mc Laughlin’s much admired son of Sportsmans Daredevil. Bred out of homebred ewe by Procters Cocktail, this lamb had already claimed Reserve Male Champion at the All Ireland in Donegal a few weeks earlier. He went one better this time taking male champion and Overall Champion of the day! Not only did he leave his mark in the show ring but he also topped the sale at €13,000!! It was the two way syndicate of Ronan Gallagher (Enniscrone Texels)and Jimmy Garrivan (Clew Bay Texels) were highest bidders. We wish them well with their purchase as this is a record for the price for a lamb bought in Blessington by members of the Irish Society. 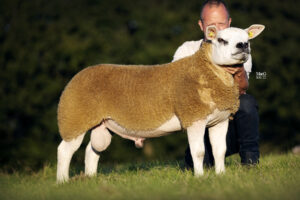 Next up was the recorded ram lamb class. This time it was a ram lamb from Robert James Dunne was the Walker’s pick. Sired by Loosebeare Chief, this lad was snapped up by Donegal Breeder Andrew Cox for €2,000gns. 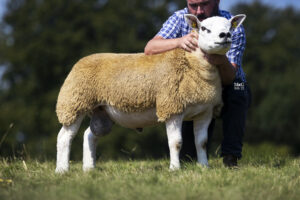 Next up for the Walkers was the biggest class of the day, the Novice Class. This was won by new breeders the Doherty brothers from Donegal. This was their first year breeding, and their winning streak did not end there. They later went on to claim Reserve Male Champion! This lamb, a son on Midlock Dorito was snapped up by Louth Breeder Shay Sheridan! 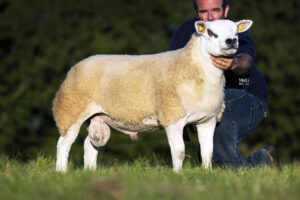 Last but not least was the Irish Sired class. It was another father and son duo, John and Neil Kidd who were tapped out first by the Walker Brothers. Their Son of Thornville Elvis who himself was purchased in Blessington last year was picked up by Paul Swindell Co Down for €2,000. 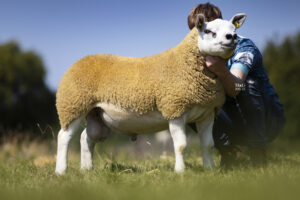 The society would like to thank both Robbie and James Walker for the super job they did judging. Their speed and decisiveness ensured that both sheep and exhibitors were not standing in extreme heat for prolonged periods of time.

Quality was in high demand in the Shearling ewes. The previous record price of €6,500 was matched on Friday evening by the Walkers brothers. Their much admired Harestone Commander daughter had earlier in the year stood 2nd in the National Championship at the Clonmel show. She was the top choice of renowned show man Paddy Morrisey. 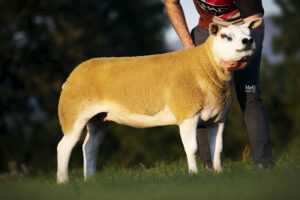 Next up was a daughter of Garngour Dictator from John Neville. This lady was previously South East Female Champion and she heads to the Uskvale flock for €3,800 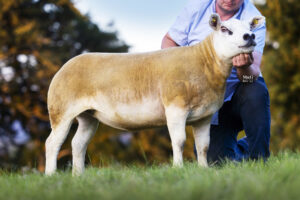 Coming up next was Thomas Kenny with another Harestone Commander daughter who earlier stood 2nd in the shearling ewe class. She was the pick of new breeder Paul Murphy. 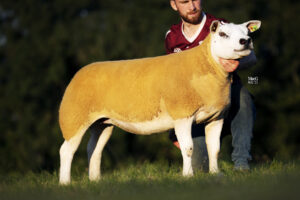 With the same trend as the shearling ewes good quality lots were in demand. Ewe lambs topped at €4,000 by the previously mentioned Female Champion.

Next up in the prices was Brian Divilly with his Sportsman A Star ewe lamb. She was the choice of Northern Ireland breeder Brian Hanthorn for €2,200 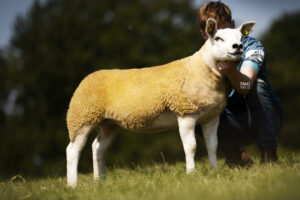 Increased commercial demand for good fit able sheep saw a strong clearance rate of 81%. An exceptional average of €1226 for Ram lambs. With commercial farmers picking lambs up from 500 to 1000 throughout the sale and then this was backed by a strong breeder demand with 53 ram lambs selling at €1000 or above.

After the sale topping ram lamb of €13,000 next up was €5,500 from the pen of Robert James Dunne with another Loosebeare Chief son! This boy heads across the water to syndicate of Scottish flocks Robert Laird, Neil Edmundson and Kenny Johnstone. 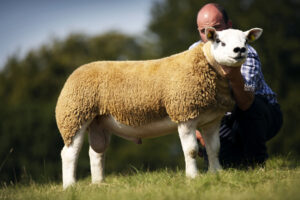 Next in the money again was Pat and Barry Farrell with an Rhaeadr Edge son who came to sale off the back of a successful show season after being Champion in Dundalk and Reserve Overall at the Nationals in Clonmel. This boy was the pick of Patrick & James Murphy and Padraig Varley Mayo for €5,000 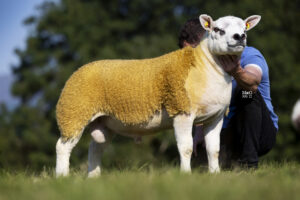 Also at the same money was first in the ring from the Greenhill flock a son of the renowned Procters Class act. This ram saw Eugene and Malachy Hand reinvest from their successful sale earlier in the day. 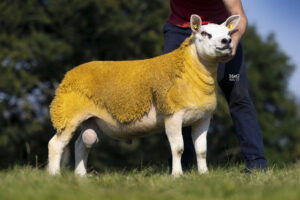 Coming in close behind at €4,000 was a Midlock Dapper Son from A and P O’Keeffe. He was the choice a Meath breeder Michael Bird. 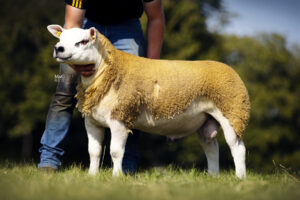 Just shy of 4k at €3,800 was the top price from the flock of John and Neil Kidd. Their Teiglum Eclipse son was snapped up early in the day by Galway breeder Jack Swift! 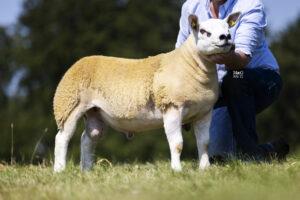 We were back to Greenhill pen where they received €3,500 for a son of last years €10k Kilcurley Ed. this lads new owner is Co Louth breeder Ellen Deery. 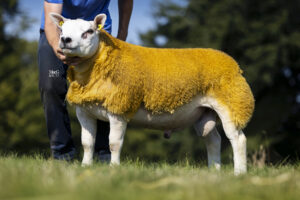 Last above the 3,000 mark was Brian Connelly with €3,200 for hisTeiglium Cinnamon son. This one being the top choice of Donegal breeders Willie Doherty and Mark Dolan 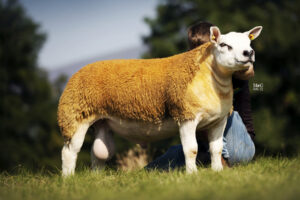 Texel shearling rams were in high demand this year with a clearance rate 88% and 13 more shearling rams sold this year then last year. The average selling price increased to €1236 with a high number of farmers sourcing long well bodied rams from 500 to 900.

Topping the shearling trade were new breeders Irene and Iris Brazil from the Mount Prospect Flock. Their first ever ram shown in the premier sale, Efrain who is a son of Murphys Dakota. He sold in a 4 way split so northern buyers Duvarren, Brackney, Hillhead and Dallas. Iris was an attendee at the May young breeders event which she noted she got helpful tips that helped her in turning this ram out for sale. Stay tuned to social media for our next event like this. 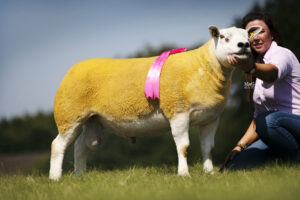 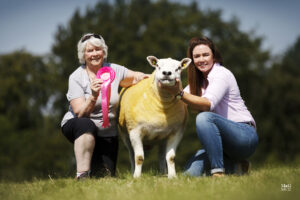 Hitting the €3,000gns was the second prized shearling ram from Eugene and Malachy Hand sired by Hillswood Doane. This ram was the pick of Matthew Ryan Co Wexford. 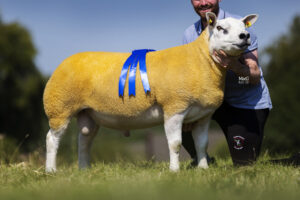 Next highest in the shearling rams was Thomas Kenny with a Lakeview Destiny ram. He found a new home in Fermanagh with Owen Donohoe for €2,500gns 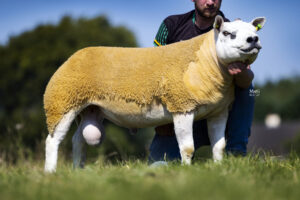 Overall the demand on the day was strong commercial and pedigree breeders in Ireland North and South, Scotland, Germany and Italy.