Stars shone the brightest at the Texel Premier Sale…

Stars shone the brightest at the Texel Premier Sale…

After months of planning the highlight of the Texel calendar did not disappoint. The judge on the Friday was Aaron Myles of the renowned Silverhill flock in Donegal. To ensure the  safety of the members and customers alike Aaron selected his top choices from the pens and reviewed the sheep out of the pen. The day kicked off with the Shearling ewes and coming out in the top spot  was a stylish daughter of the 2015 All Ireland Champion and she was sired by Garngour Bladerunner from the Derrylahan flock owned by Brothers Daire and Enda Mcmanamon. This stylish ewe went on to be Aarron’s pick for the female championship. This ewe was not only the judges pick, she was also Garrett Murphy’s pick for of the Garavilla flock for €2,800gns, Garrets agreement with the judges choices did not end there with him buying up the top 4 placed shearling ewes. 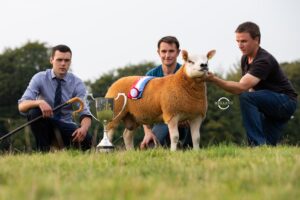 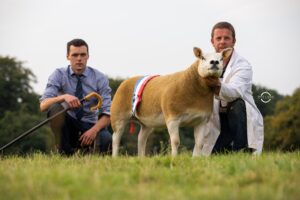 The next class was the ewe lamb class. His choice this time was a classy ewe lamb from the Ballypierce flock of Clive Rothwell. She is sired by a homebred ram Ballypierce Champion and out of a homebred ewe.  This ewe lamb also boasted exceptional stars with 5 stars for replacement and 4 for terminal. She heads to the renowned show flock of Aidan and David Craig Co Meath. 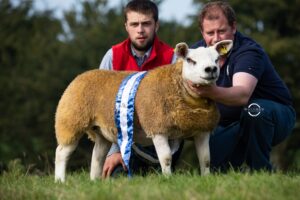 The open ram class then followed with the largest entry of the day. Coming out in top spot here was John Greene of the renowned Larahirl flock with a son Procters Cocktail. This lad headed home with new breeder Mick Hoey and Martin McGuinness for €2,400gns.  His full brother also sold for €3,000gn to D. Sheils, C. Hegarty and John Stewart.

The last class of the day was the LambPlus Class and it is where Aaron found his champion. The judges choice on this occasion was Greenhill Dance Monkey a double five star ram, from the McHugh family Co Monaghan. It showed the next day how much judge thought of the Champion when he purchased him for the top price of the day at €6,500gns. Dance Monkey is sired by last year’s sire of the year Kilclamon Brody and out of aThornville Alberto ewe. Both purchased in Blessington.

The McHugh family outfit didn’t stop there, selling a further three rams for €2,600, €1,500 and €1,500. Hitting the upper of these was another son of Brody, this time going back to an Anglezarke Uno ewe.

Taking home a price of €6,000 was Neville Myles of the Silver Hill Flock in Ballyshannon, Co Donegal. Unable to be shown due to Neville’s son Aaron judging, this didn’t stop people from seeing the potential. Born March 2020 the ram lamb is sired by Sportsman A Star and out of a sister of the 15,000gns Bushtrucke. Myless’ also sold a January born lamb by Auldhouseburn Capaldi for €1,600. 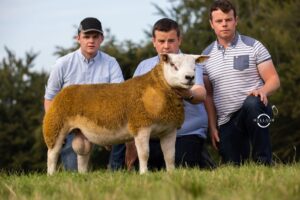 Ciaran Heraghty secured a bid of €4,200 for his ram lamb Tullyhill Desert Eagle. This son of Garngour Alabama is out of a homebred ewe sired by Fordafourie Windfall. This lamb heads to Mayo with Martin Walsh.

Next in the prices was Emlach Derrick from Fergal Ó Sé. A son of Straghbogie Ya Belter with the dam an ET brother to the 2017 reserve national champion. He sold to the Springhill flock for €3,800. 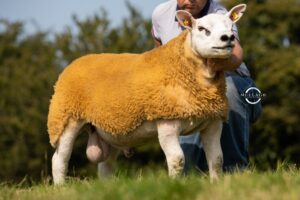 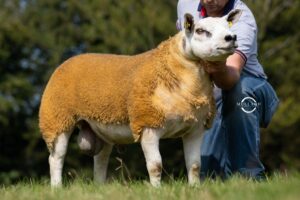 Sold just before Derrick, was Emlach Demophan, for €1,700. This one was a son of Sportsman Belter and out of a Teiglum Young Gun. 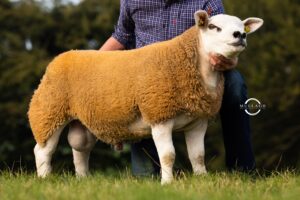 Next was new breeder Brian Divilly, Co Galway with Annaghdown Diego. This March born ram lamb is a son of Garngour Aerosmith and out of last years premier sale female champion purchased from the Annakisha flock. He was sold for €3,200. 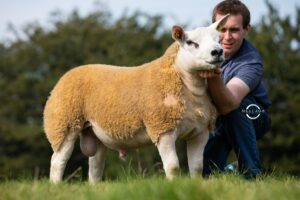 Robert Walker then secured a bid of €2,000  for his ram lamb Kilcurley Dawson. This 15,000gns Harestone Commander son is out of a Springwell-bred ewe and stood second in the LambPlus class. This lamb also heads to Springhill flock.

Michael Power exhibited his first ram at the premier with the help of April and secured €1,900  . His February 2020-born ram, Ballyhibben Dancing Brave, was sired by Sportsman A Star was snapped up by Walter Brennan. 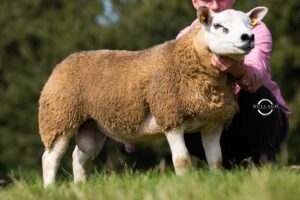 Thornville Double O Seven who hit the market at €1,800. This ram lamb came fourth in the LambPlus class and is a son of Knock Bantastic heads back to Wexford with Anne Murphy of the Foundry flock.

Topping this section was Danny Murray taking home €2,000gns for his shearling ram sired by Quarry House Baby Guinness who was purchased in Blessington 2018.

First prize in the shearling ram class went to Flor Ryan with Lawn Cracker Jack. This five star terminal ram is a son of Derrylahan Big Balls with the dam a daughter of Baileys One & Only.

Next was Daire and Enda McManamon with Derrylahan Chancer. This Clarks Bolt son hit the market at €1,600. 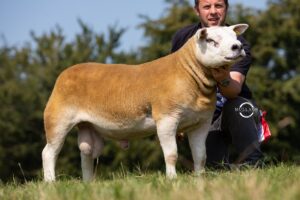 Second prize winner in the shearling ram class was Rower Colby from Kate Purcell, Co Kilkenny. Sired by a Milnbank ram by  Straghbogie Yes Sir, he was knocked down at €1,500. 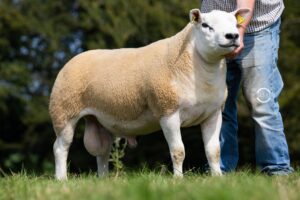 One of the first ewes into the ring from Johnny Ryan got the sale off to a flying start when she sold for €2,800. This double five-star shearling from the Graigues flock is a daughter of Speenogue Alonso.

In directly after her and securing a bid of €1,600 was another from Graigues flock. This March 2019-born ewe again has five stars on the terminal and replacement indices and is a daughter of Foundry Achilles.

Flor Ryan was also in the money when he sold a daughter of Kilclammon Branston for €2,200. From the Lawn flock, this shearling is out of a homebred ewe by Pairc Aird Titmus.

Just before that, Flor’s third prizewinning shearling hit the market at €1,800. This daughter of Derrylahan Big Balls is a full-sister to a ewe sold at the Premier in 2017 for €4,200. 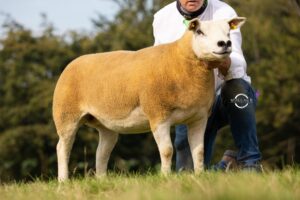 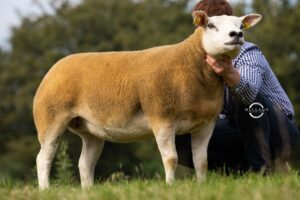 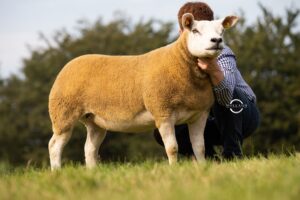 Second prize in the shearling ewe class went to Robert Walker for a ewe from his Kilcurley flock. This five-star terminal ewe is a daughter of Hartside Assassin and hit the market at €2,000. 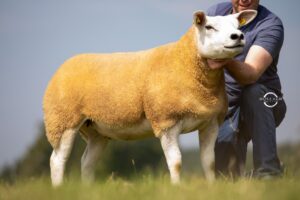 Walker’s ewe directly after this, another Assassin daughter, sold for €1,600. 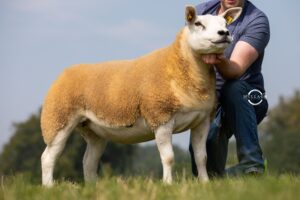 Neville Myles’s Silver Hill flock in Co Donegal got two shearling ewes away, at €2,000 and €1,400 respectively. Hitting €2,000 was a double five-star ewe by Stringwell Abu Dhabi, while selling at €1,400 was a daughter of Milnbank Ally-Cat out of a Knock Trident-bred ewe.

Meath breeder Jackie Ryan got into four-figure sums with two of her Rotsee flock shearling ewes. First up at €1,600 was a daughter of Derrylahan Big Balls, while at €1,400 was a Speenogue Alonso daughter.

John Neville of the Thornville flock got his two top ones into €1,100 and €1,000. At the upper price was a daughter of Plausucha Commander, while the second was a Plasucha All Star-sired ewe. 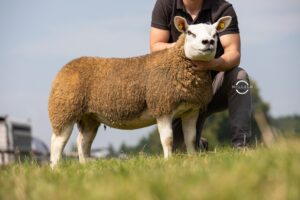 In the ewe lamb class, the third prize winner from Fergal Ó Sé’s Emlach flock sold for €2,000. This daughter of Deveronvale Aftershock is out of the same dam as the champion at last year’s sale. 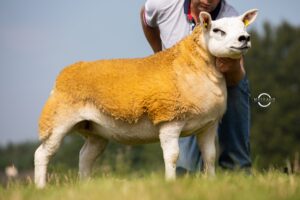 Hitting the market at €1,800 was a ewe lamb from Ryan Doherty’s Hill View flock in Co Donegal. Sired by Procters Cocktail, who also sired the reserve supreme champion this year, she is out of a Straghbogie Yabba Dabba Do-bred ewe. 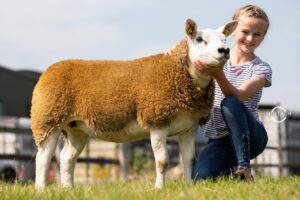 Hitting 1,400 and 1,100 was father and son duo Neil and John Kidd with their Knock Bantastic daughters. 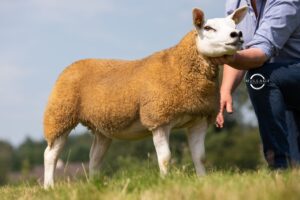