2019 was another successful year for the club, with numerous prizes and high prices achieved by our members

It was a day to remember for young breeders Cathal and Tony Lavin who took their first ever west region championship with an outstanding Texel shearling ewe bred by Strathbogie Yabba Dabba Do out a Larahirl ewe bred by Holylee volcano , This shearling ewe won numerous local shows as a ewe lamb throughout the region last year.

In reserve was a shearling ram from Sean Alma and Lorraine Brennan with Nilands Blockade who was overall west region champion last year. This ram was bred by Claybury American Gangster out of a Knock Ursus ewe

Other results on the day included Cyril Keane winning the aged ram class with a son of Tophill Wall St.

Thomas Kenny took the aged ewe class with a homebred Annakisha Uproar daughter she went on to take reserve female champion on the day.

In the open ram lamb another young breeder Darragh Cunniffe took the red rosette spot with a son of Thornville Anthony.

Keeping with the trend of the day another young breeder Brian Connelly took first prize in the ewe lamb class with a daughter of Forge young gun.

In the March ram lamb class the Niland family took top honours with a son of Mullan Blow Your Mind this classy lamb went on to take reserve male champion on the day.

In the confined ram lamb class Shane Hynes took the red rosette with a son of Annakisha Barry, in the final class of the day the Niland family won the group of three with a shearling ewe of Claybury American Gangster and a ram lamb and ewe lamb of Strathbogie Boss

Many thanks from the club to our judge on the very wet day John Greene co Donegal who did a fantastic job judging, 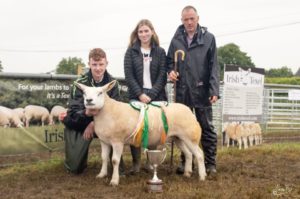 The all ireland was well contested again this year by our members. With Tom kenny of the Hillswood Flock winning the aged ewe class she is sired by Midcombe Axel   it was also a great day for connemara breeder Patrick Joyce who picked up 2nd prize March ram and 3rd prize March ewe lamb both being et siblings sired by Knock Yazoo. Finally the Niland family picked up 3rd prize in the Shearling ewe class sired by bluegates aviator in what was one of the biggest classes of the day. 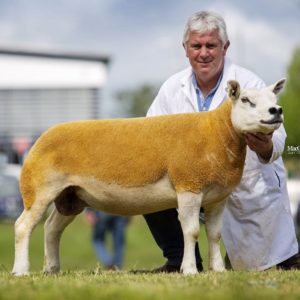 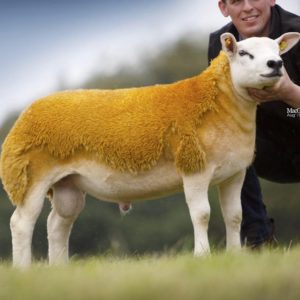 Local sales in the west club went well overall with the premier sale in Roscommon being the best of the bunch top price again went to Brian Connelly who sold his Figart Ace ram lamb for 1200gns. Top price in Athenry was from Tom Kenny selling the champion for 800gns 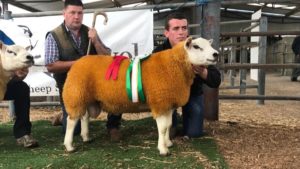 The show Flock winner from the west region was Tom Kenny winning it for the 2nd year in a row congratulations to Tom on making a great effort again in 2019.

The regions annual in lamb ewe sale was a great success with a very high clearance rate and a good average selling price, topping the sale was Patrick joyce selling a Clew Bay Acro sired hogget for 1350gns

Avg price on the night was 589gns 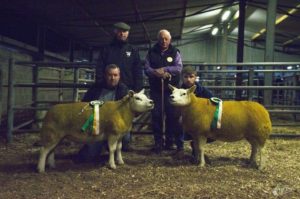